Part of rolling a new business out in different capital cities involves packing everything in the van and going for a drive.  In this case, we drove 1,700km from to spend two weeks in demonstrating our services to a variety of asset owners.
June is of course Winter, and we got a fair dose of it.  There were a few spots of sunshine testing light poles in a park in Fitzroy where we successfully found two or three poles that had some serious rust issues.  The beauty of our testing is that we don’t actually need to dig up the base of the pole to find a problem, but since this was a demonstration the ground was excavated so we could have a look. 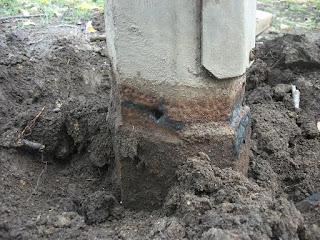 We spent an evening testing poles out in Rowville.  The gale force winds made life difficult – blowing hand written notes and maps away if we let go of them just for a second. But we persevered and successfully tested twenty four poles down the centre median of a main road thanks to the help of our traffic control crew.

The next night we were in Frankston with the aim of testing poles along the Nepean Highway.  The wind had stopped, but the rain had started.  It didn’t let up all night and the Bureau of Meteorology rain radar was showing a solid blanket of rain over the city.  We still managed to test a few poles – getting ourselves soaked in the process.  With only a limited time in there’s not a lot of choice.

The time in was well spent.  I think we impressed a few potential clients and proved that we can work quickly and reliably detect faults.
Hopefully we will soon have a permanent presence in